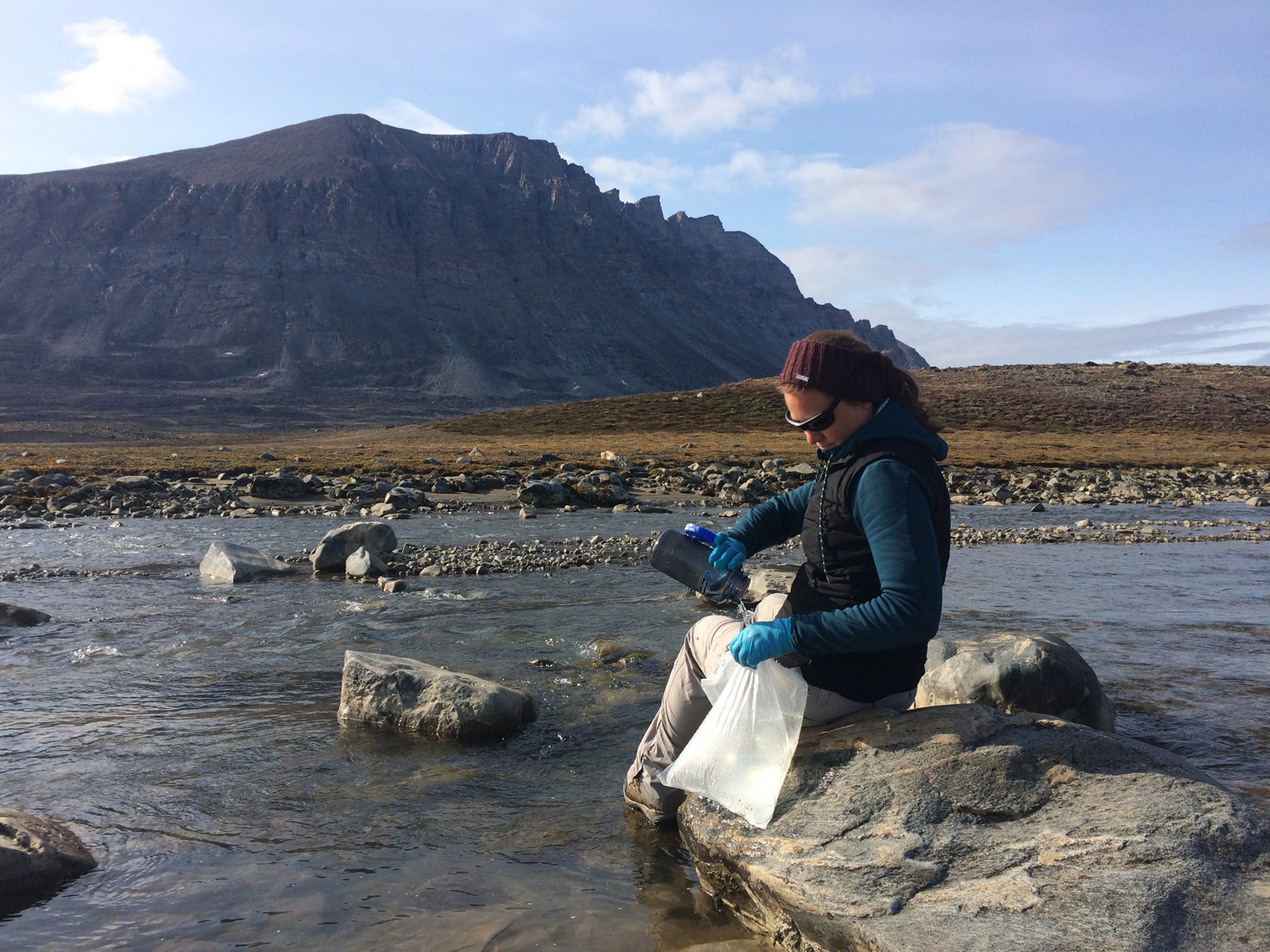 What happens in the Arctic doesn’t stay in the Arctic. The Arctic is warming presently twice as fast as the global average. Upon permafrost thaw, the massive amount of previously frozen organic matter (OM) is exposed to microbial decomposition, thereby generating greenhouse gases that have the potential to fuel further global warming. Close interactions between OM and minerals are thought to protect OM from decomposition. Here we present our OMI-Perm project, which aims to investigate the evolution of organo-mineral interactions during lateral transport from permafrost soils to rivers to the ocean.

Unprecedented warming across the Arctic, presently twice as fast as the global average, has the potential to affect global biogeochemical cycles[1]. The thaw of hitherto permanently frozen soils (permafrost) may trigger a positive feedback loop, since permafrost soils store large amounts of organic matter (OM)[2, 3]. Upon thaw this OM is exposed to microbial decomposition, enhanced with warming, thereby generating greenhouse gases that fuel further global warming. Permafrost thaw occurs both gradually from the top and through more abrupt thaw processes (thermokarst), leading to collapsing landscapes. The extent of thermokarst disturbances is predicted to increase across the Arctic, which will affect the release of OM to aquatic environments. During its transport from headwaters and small streams to larger rivers and the Arctic Ocean, this mobilized OM may either be mineralized and released as CO2and/or CH4to the atmosphere or stabilized by mineral association and buried in river, lake or ocean sediments. The fate of OM during lateral transport may thus determine the strength of the permafrost-carbon feedback to climate but is currently afflicted with high uncertainties.

Close interactions between OM and minerals, such as physical protection and adsorption, are thought to protect OM from decomposition[4]. Yet, how this complex interplay of different mechanisms functions and evolves from soils to the marine environment is still poorly understood.

In August 2019, we travelled to the Zackenberg valley in Northeastern Greenland (74º28’ N, 20º34’ W) in order to quantify and characterize the organic and mineral export from two contrasting Arctic rivers. Our fieldwork campaign, funded by the INTERACT EU-Horizon2020 program, was based at the Zackenberg Ecological Research Operation (ZERO), which is owned by the Government of Greenland and is operated by the Department of Bioscience, Aarhus University (Denmark). Here, soil temperatures have been rising  for the last three decades. During summer 2018, once the unusually thick and long-lasting snow cover had finally disappeared, researchers of Torben R. Christensen’s team (Aarhus University, Denmark) discovered a rapidly evolving thermokarst erosion feature in close vicinity of the research station. During summer 2019, Greenland made headlines around the world, with temperatures climbing up to 12°C hotter than the average in late July and breaking the 1-day melt record of the Greenland ice sheet on August 1st2019 (Witze, 2019).  Quite an exceptional time to conduct research in Greenland!

During the three weeks at ZERO, we collected soil samples from the active layer (i.e., the seasonally thawed ground, 30-100 cm thick around Zackenberg) and the permafrost below at places of abrupt thaw (thermo-erosion gullies and retrogressive thaw slumps). We also gathered water and sediments samples along the thermo-erosion features as well as from headwater streams, larger rivers and their deltas in the Young Sound. We focused our sampling efforts on the catchments of Zackenberg River (512 km2) and Grænseelv (a ~7 km2catchment directly discharging into the Young Sound), spanning from upstream tributaries to the outlets. We targeted sites before and after the main confluences in order to assess the different tributary contributions in dissolved and particulate export.

For the first two weeks, conditions were very dry, leading to the decrease in Zackenberg river level and speed, and the drying up of some smaller streams. Then, two rain events occurred. The river discharge and the sediment load quickly increased and we made use of the opportunity, to sample the Zackenberg river and its tributaries and Grænseelv at contrasting hydrological conditions.

At the end of the summer (late August in the High Arctic) the active layer depth is at its maximum and the subsurface discharge in the active layer is therefore at its highest. By investigating these three hydrological events, we hope to constrain the effect of rainfalls on the organic and mineral export and to assess the relative contribution of  permafrost organic matter from thermo-erosion inputs or subsurface water flows.

During the 21 days in the Zackenberg valley, we walked about 10 km per day on average, and we carried a total of ~550 L of pristine water on our backs. After sample collection, evenings (and the few very rainy days) were dedicated to filtering and sample preservation. We used three different filter units: one for large-volume water samples for biomarker analyses, one for particulate and dissolved organic matter analyses, one for particulate and dissolved mineral analyses, altogether providing material for the wide suite of biogeochemical analyses that will be conducted from now on in our respective labs. Soil samples and sediments will be analyzed for carbon, nitrogen and hydrogen concentrations and isotopes, as well as different types of biomarkers, and mineral composition. Snow and water from the thermo-erosion features, streams and river will be analyzed for water isotopes (d2H, d18O), dissolved organic carbon concentrations, radiocarbon content (∆14C) and optical properties of the dissolved organic matter, as well as mineral element composition. Crucially, all OM and mineral analyses will be performed on the same samples using consistent techniques along the entire transect. By breeching these disciplinary boundaries and combining a suite of state-of-the-art techniques integrating biogeochemical and mineralogical analyses, we seek to advance our understanding of the permafrost carbon cycle and the northern ecosystem responses to climate change.