Smart Aquaponics: boosting local production and food autonomy thanks to an app ! 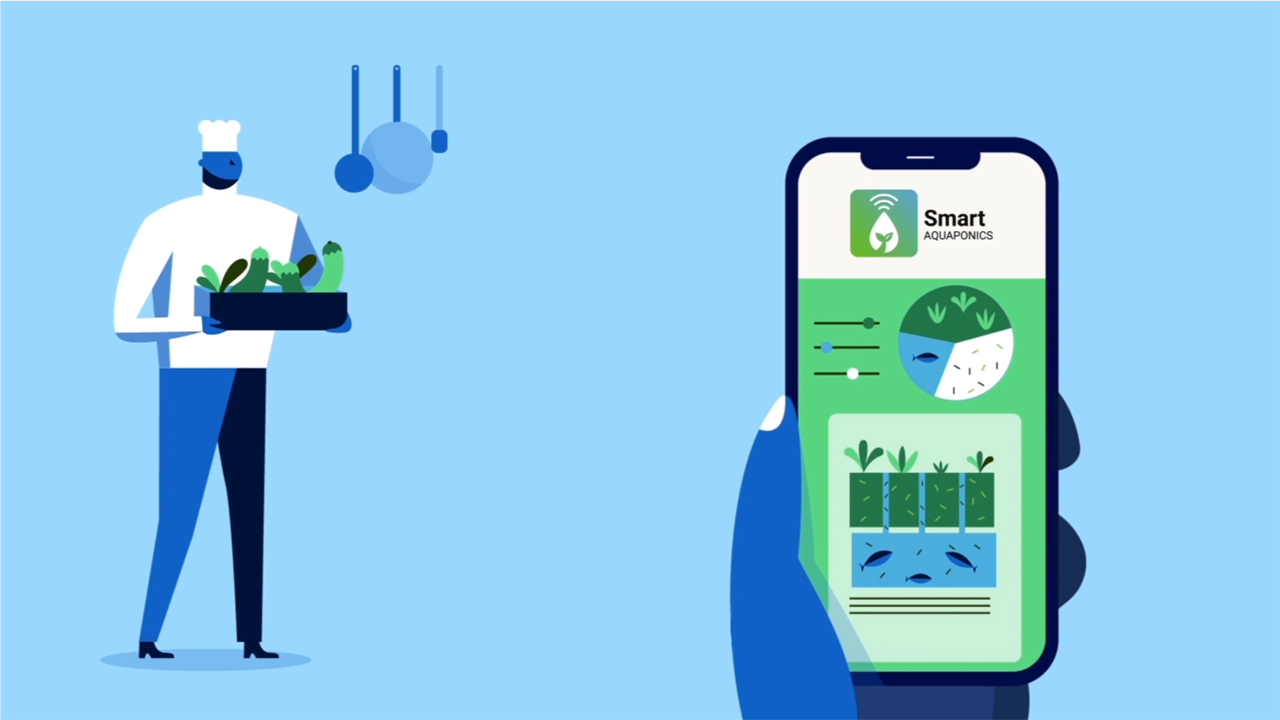 In today's context of resilience, it is more than ever a question of rethinking the way we consume, but also of producing quality and sustainable food. With this in mind and after two years of research, the C-RAU (Centre de Recherches en Agriculture Urbaine, in Gembloux Agro-Bio Tech ULiège) has just finalized a computer model simulating aquaponic systems. The latter allow the production of vegetables and fish in one and the same place. This model is the basis of a smart and innovative application: Smart Aquaponics. Thanks to this app, it becomes possible to learn about good aquaponics practices while having fun.

n the spirit of "serious gaming", this application makes it possible to revive a cultivation technique that is experiencing renewed interest: aquaponics. Already in use at the time of the Aztecs, it is now an integral part of urban agriculture. Aquaponics, which offers many advantages, is now accessible to the greatest number of people, from private individuals to businesses, HoReCa, schools and associations.

"Contrary to popular belief, aquaponics is more than just feeding fish and gardening. It's about creating a real 'cradle to cradle' ecosystem and keeping it going. Our application will allow us to master the technicality of this production model, based on scientific observations. The approach is as user-friendly as it is fun: Smart Aquaponics has been designed in a Tamagochi spirit", explains Prof. Haïssam Jijakli, founder of the C-RAU, at Gembloux Agro-Bio Tech ULiège, and coordinator of the Smart Aquaponics project.

Smart Aquaponics refers to both the project funded by Europe since 2018 and the interactive application itself, which will soon be available to users. Compared to the aquaponics models existing to date, the system developed in spring 2020 at C-RAU is modular, accessible and replicable. Smart Aquaponics is also a participative and evolutionary tool: it is enriched over time by integrating feedback. In other words, the larger the user community grows, the more accurate the app becomes. This small system can also become more professional, up to the setting up of an aquaponics farm. As there are already some in our company, for example, at the Slaughterhouse Farm in Anderlecht (BIGH). Some secondary schools, such as the PTI (Provinciaal Technisch Instituut) in Kortrijk or the Don Bosco Institute in Woluwe-Saint-Lambert, which already have an aquaponics system, are considering integrating Smart Aquaponics technology.

Smart Aquaponics is a monitoring, decision support and training tool that should equip the first aquaponics systems by the fall. Workshops on this theme will thus be able to be given in schools, non-profit organisations and other community structures. This is to create synergies while (re)introducing (re)introducing cultivation techniques that are full of potential.

Advantages and benefits of aquaponics

About Smart Aquaponics and the actors behind the project

The Smart Aquaponics project was officially launched in September 2018, with the support of Europe (ERDF), the Walloon public service (DGO6), the Province of West-Vlaanderen and Oost-Vlaanderen. 2 million euros have been invested in the development of intelligent management tools for aquaponics.

Under the coordination of the ULiège, and more particularly the faculty of Gembloux Agro-Bio Tech, a group has been formed of partners with complementary expertise:

The Smart Aquaponics project is led by the C-RAU (Centre de Recherches en Agriculture Urbaine, in Gembloux Agro-Bio Tech ULiège), and respectively by :