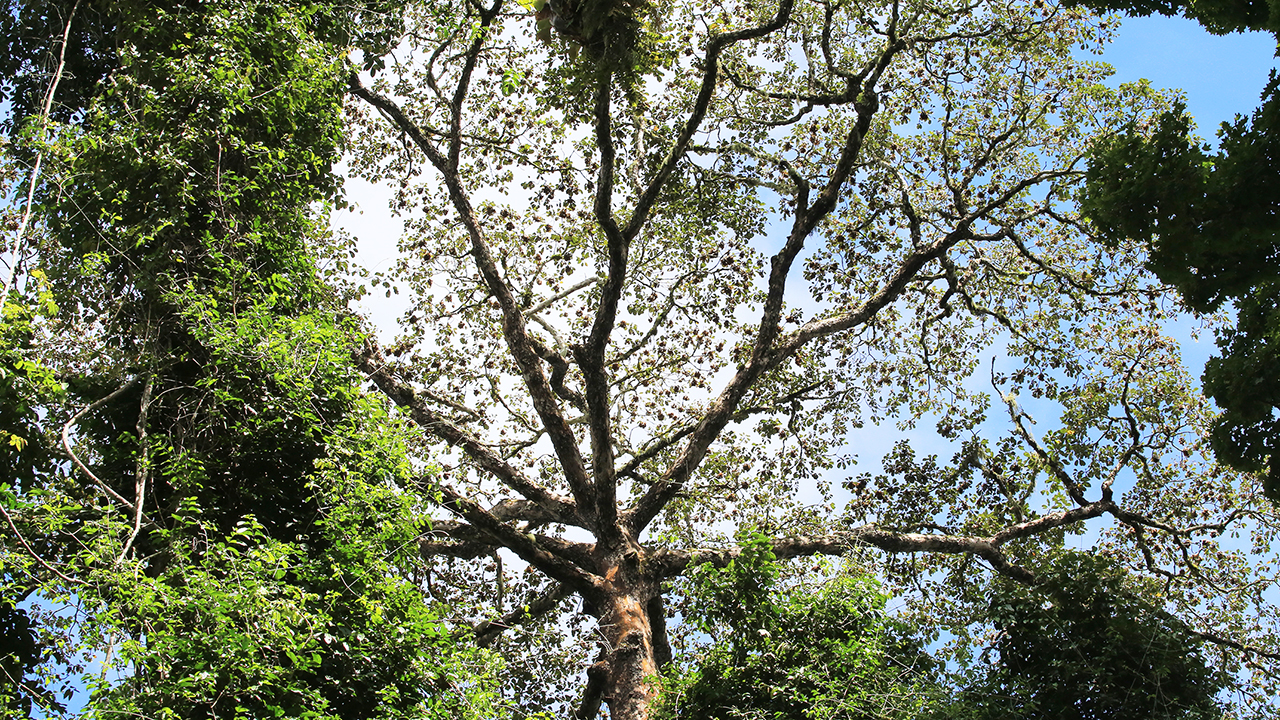 A recent study* carried out by the Belgian Royal Museum of Central Africa and the University of Leeds, in which researchers from Forest is Life  (TERRA / Gembloux Agro-Bio Tech) participated, shows that the capacity of some tropical forests to capture CO2  from the atmosphere is greatly reduced. Whereas they were considered important carbon sinks until now, the Amazonian forests are likely to become a source of carbon in the future. This is due to slower growth and higher tree mortality caused by climate change. These results have just been published in the scientific journal Nature (1).

ntact tropical rainforests are known to be carbon sinks, i.e. they slow global warming by capturing CO2 from the atmosphere and storing it in their trees.  In the 1990s, intact forests eliminated 17% of anthropogenic CO2 emissions. This figure fell to about 6% in the years 2010. Although these forests remain important carbon reservoirs, their capacity to sequester additional carbon in trees is declining. This is what a study conducted by the Belgian Royal Museum for Central Africa and the University of Leeds has shown, bringing together a team of researchers from more than a hundred research institutions, including researchers from the TERRA Teaching and Research Center (Forest is Life / Gembloux Agro Bio Tech). The 30-year study measured the growth and mortality of trees in 565 intact tropical forests in Africa and the Amazon.

“In 30 years, the capacity of these forests to capture carbon has decreased by 33% while our carbon emissions have increased by 46%," explains Jean-Louis Doucet, president of Forest is Life at ULiège. On the other hand, there has been a 19% decrease in the area of intact forests. ». The models developed by the researchers show that the absorption capacity of Amazonian forests is decreasing much faster than that of African forests. This difference can be explained by a combination of two factors: on the one hand, the Amazonian forests are more dynamic than those in Africa and, on the other hand, the impact of climate change is more strongly felt in the Amazon. Under these conditions, the Amazon could already become a source of carbon as early as the late 2030s.

According to Jean-Louis Doucet: "Ensuring the maintenance of forest cover through a network of protected areas and sustainably managed forests must become a priority in order to mitigate the effects of climate change. Because, regardless of the continent, impressive stocks of carbon persist in forests, including those that are exploited for wood production. The conversion of forests to agricultural land contributes about 13% of global CO2 emissions. Finally, trees should be planted outside forests as soon as possible and without damaging biodiversity. "Gembloux Agro-Bio Tech and its partners, through the P3FAC project, are precisely quantifying the evolution of carbon stocks in forests exploited for timber production. The P3FAC project  will make it possible to assess the emissions linked to exploitation and the fixations resulting from growth and post-exploitation regeneration. 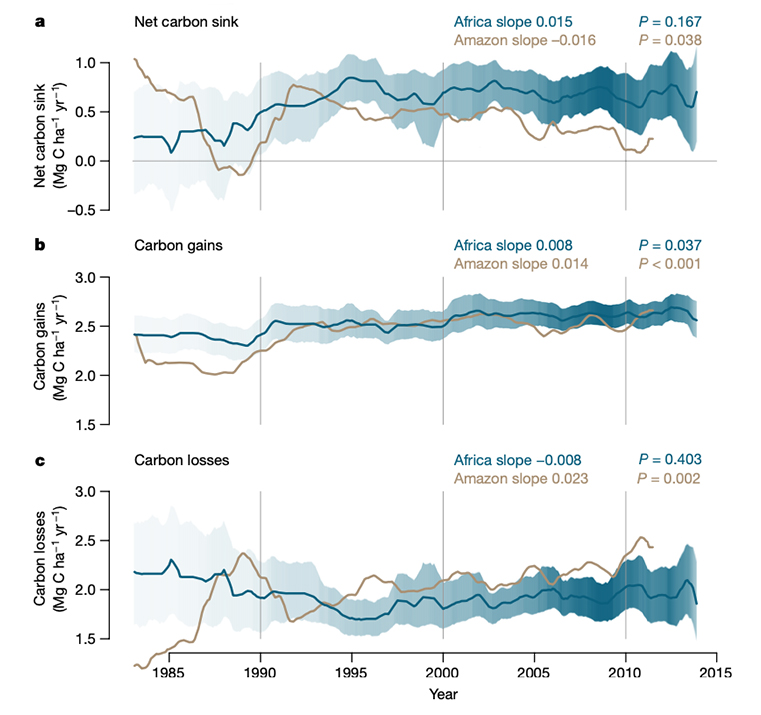 Carbon sequestration slows down much less in the forests of Central Africa compared to the Amazonian forests. (a) Trends in net aboveground live biomass carbon, (b) carbon gains to the system from wood production and (c) carbon losses from the system from tree mortality (c), measured in 244 African inventory plots (blue lines) and contrasting published Amazonian inventory data (brown lines; 321 plots).

"The ability of forests to slow climate change is a crucial element in our understanding of how our planet works, particularly the amount of carbon absorbed by the earth's surface and released into the atmosphere," says Dr Wannes Hubau, a researcher at the Royal Museum for Central Africa and first author of the article.  Monitoring intact forests is crucial if we are to be able to track the effects of climate change. This work is more necessary than ever, as tropical forests are under increasing threat." Scientists' main fear is that a tipping point will be reached at which nature will become an engine for accelerating global warming rather than a brake.

*This research has been funded by more than 50 projects over two decades, including a European Research Council project (Tropical forests and the changing Earth system, T-FORCES), by Oliver Phillips and Simon Lewis; and a Brain project of Belgium's Science Policy Public Programming Service (BELSPO) (BR/132/A1/AFRIFORD).